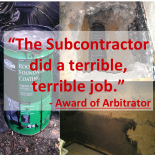 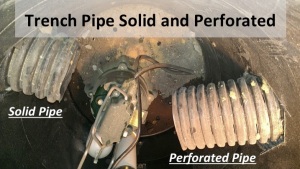 AquaGuard Waterproofing Corporation numerous trench path failures and breaches of contract, describe to date in previous postings, are irrelevant because of an even grosser failure.  In this posting I’ll describe how they amazingly used solid, instead of perforated, drainage piping rendering the system laughably ineffective.

First, let’s examine what should have been done; indeed what they said they would do.  As described by their so-called Senior Inspector and as written in AquaGuard’s Proposal:  Aquaguard Foundation Water Management System:  “In the trench path, Aqua Guard will install 4 inch Advanced Drainage System perforated, flexible coiled piping in a bed of large washed gravel, sloped 1 inch for every 10 feet for proper drainage.  This drainage piping will empty into a 30″ sub-floor, commercial grade plastic container housing a heavy-duty submersible 1/2 horsepower pump.”  Note the fact that the coiled piping is specified to be perforated.  Why are there holes in a pipe meant to channel water to a sump pump container or enclosure?  To answer this question, let’s look at what the experts had to say.

Q. Okay. I take it you’ve never seen a solid pipe in that trench?
A. No.
Q. Because that would serve no purpose?
A. No purpose at all.

Q. Okay. I presume that you would never under an AquaGuard foundation water management system ever install a drain tile or pipe that wasn’t perforated, would you?
A. No. It’s not going to work.
Q. That would defeat the whole purpose of the system, right?
A. Exactly, sir.

Finally from AquaGuard’s General Manager we have the following, with questions (Q) from my side and answers (A) from the Senior Inspector:

Q. The proposal indicates that it will, you’ll, in the trench path, AquaGuard will install four inch ADS perforated flexible coiled piping. Do you agree that that was your obligation to provide perforated piping?
A. Correct.
Q. Would you agree that there were sections of the pipe that weren’t perforated?
A. From your pictures you’ve shown me,  correct.

I beg your pardon, Mr. General Manager of AquaGuard Waterproofing Corporation, but would it not have been better if AquaGuard itself had discovered this blatant breach of contract?  Why didn’t someone take time to examine the work being performed at my house?  As your own people explained, solid pipe serves no purpose.  WHERE WAS THE QUALITY CONTROL??

The General Manager goes on to testify:

Q. And would you agree with me that the system could not possibly work if the solid pipe was installed?
A. That’s not the way I would do it, and you should have perforated pipe, but the water basically travels through the gravel, and that just gives it a place to go through.
Q. I understand. Is it your testimony that a solid pipe, that the system, the AquaGuard ADS system could function efficiently and in accordance with industry standards with a solid pipe?
A. No.
Q. So is it fair to say that the installation of a solid pipe in this case would violate both the terms of the contract and industry standards for this kind of system, right?
A. Yes.

As the Arbitrator noted in the Award:

“The drain pipe itself should have been perforated to allow water to enter the pipe and drain off to the sump pits.  However, much of the pipe was solid (i.e., not perforate) and thus ineffective.”

Now here’s the joke, on me unfortunately.  One might worry about the ease with which this dirt, with perforated pipe stuck into it, would flow into the pipe through the perforations and clog the pipe.  Not to worry.  AquaGuard’s piece of work, waterproofed as they like to say “…with uncompromising pride, integrity, and value for life!” would never clog because it was solid pipe!  Of course, it wouldn’t take in water from the trench path either but, hey, these are just details…

The simple truth is, AquaGuard hired a disreputable contractor who ripped me off by, among other things, installing solid pipe instead of using the correct perforated pipe.  AquaGuard can try to excuse their blindness to this but, and this is a recurring theme, all they had to do was send someone, really anyone, out to inspect the work.  Why they wouldn’t do such a basic thing is something only they can explain.  As for me, I would only say to the reader “Buyer Beware”!

This entry was posted on August 6, 2013 by Russ R in Waterproofing advocate.