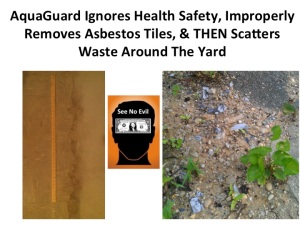 Basement waterproofing damages caused by AquaGuard Waterproofing Corporation were many and, frankly, only possible because they turned a blind eye to the work of their subcontractor.  They tout all their years of experience but what good is that if they never bother to look at any of the work done by the clowns hired to do the job?  A reputable company would review the work to be done and inspect it during execution.  They might even check to see if the company they subcontract the work out to is even licensed. Not so with the self-styled “Trusted Name in Waterproofing”.  They are too busy being late for “inspections”, not telling the truth about the goods and services they provide, failing to mention materially important facts like their tendency to subcontract out the entire job to God knows who while grabbing your money and leaving you to hassle with whoever shows up to do the work!  I trusted them and paid a heavy price.  Buyer Beware!

In this posting we will look at how AquaGuard’s “work crew” ignored the most basic of safety procedures, haphazardly ripping up asbestos floor tiling and, unbelievable, piling it up in my yard, leaving asbestos tile fragments scattered about the grass.  Unbelievable, sad, but true.

Basement asbestos hazards or the potential for such hazards are to be found in older homes.  For years floor tiling and other materials used in home construction contained asbestos; a fact that is known in the industry.  Yet even though AquaGuard Waterproofing Corporation saw the potential asbestos tiles in our basement, they failed to ensure proper procedures were followed both when breaking through these tiles during the installation of the interior drain system and during the removal and disposal of the potential asbestos material.  How could this happen?  The answer is disturbingly consistent with actions already covered in these postings.

Let’s start by considering government rules and regulations that AquaGuard’s subcontractor ignored.  Maryland like many states has adopted OSHA regulations regarding, among many other things, the proper handling of asbestos materials (See OSHA Standard 1926.1101 – Asbestos).   These regulations make it clear that materials known or suspected to contain asbestos (The technical term for the latter is Presumed Asbestos Containing Material (PACM)) must be handled properly.   PACM pertains for example to thermal system insulation and surfacing material found in buildings constructed no later than 1980.  Our house was constructed in the early 1920s and a large section of the basement floor had been tiled in the 1960s when such tiles commonly containing asbestos.  Indeed even the mastic or glue used to hold the tiles to the cement floor could contain asbestos.

The above facts related to PACMs and construction practices were unknown to me at the time but are consider common knowledge in the construction business.  That AquaGuard’s so-called Senior Inspector was aware of this potential hazard is evident from his sworn testimony:

Q.  Is that something in your training that you’re trained to do?

A.  Generally, no, but generally, in regards to that, you could just take the age of it. You could look at it. I’ve inspected thousands of basements, and generally, you can tell if it’s asbestos or it’s not.

Q.  In this case, then, were you able to conclude that it was asbestos?

A.  It appeared to be asbestos, yes, sir.

Q.  What would be the appropriate construction methodology, then, for dealing with this type of tiling in terms of how to collect it, remove it and dispose of it?

A.  My understanding, procedures are that it is to be dampened. That is typically done with a hose, just straight garden hose. Dampen it and then — so that the dust isn’t disbursed, and then bag it, seal it and then haul it away.

Q.  Okay. Do you know if that was done in this case?

I would add that if anyone at AquaGuard had an idea what was done in my basement in such circumstances, that information was either never provided to their subcontractor or ignored by him.

A little later in the sworn deposition the issue of whether the Senior Inspector notified anyone at AquaGuard about the potential asbestos hazard in our basement was examined:

Q.  So when, just going back for a second to the tiles, how do you pass on the information about your conclusion that the tiles probably contain asbestos to the office, if at all, for them to deal with?

(At this point the attorney for AquaGuard said: “Objection. You can answer.”)

Q.  What’s the process when you conclude that like in a house such as this, the tiles because of the age probably contain asbestos, what methodology is there, if any, to let the office know that you’ve concluded the tiles probably are made of or contain asbestos?

(At this point the attorney for AquaGuard again said: “Objection. You can answer.”)

A.  There’s really no procedure, per se.

I expected better of a reputable company in the overall performance of their work, but I’m admittedly naive.  One might thing that potential issues that might cause additional work, time, and expense should be discussed with the customer as well as the workers who were responsible for doing the job.  What is the point in avoiding possible problems or issues that surface during the initial inspection?  Isn’t it awkward, to put it mildly, to go through the contract signing process, take the deposit, and then find yourself in a position of having to renegotiate terms when a problem that was right in front of your face suddenly is raised?

I had a different and far better experience when my roof was re-shingled.  The person representing the contractor came to my house and acted in an honest, straightforward manner.  He stated up front he was a salesman with knowledge of what could be done, costs, and scheduling, but limited technical expertise, especially if problems arose.  He made it clear that other inspectors would be coming out to re-examine his inspection and that there might be adjustments to the work, costs included.  He noted that, based on his experience, there was a chance that lead paint was used on parts of the house that might be disturbed by the roofing work.  He went on to say that there would likely have to be testing for lead, that regulations required precautions and special care in dealing with lead, and that in the case of lead being present we would have to pay additional money to properly deal with that potential hazard.

In other words the roofing contractor salesman was open and clear that before the work could begin others more expert in the work would come by to check the accuracy of his assessment and to look at potential issues like the lead paint.  What a stark contrast to the silence and lack of follow-up displayed by AquaGuard!

You can imagine my shock when I was told by an independent inspector, weeks after the work was completed, that the busted up tiles (see picture above) on my floor in all likelihood contained asbestos and there was a chance my house had been contaminated by the contractor’s actions.  I immediately contacted an asbestos testing company (mind you, this was on New Years Eve) and got the testing done.  After all we had been through to that point, I now found out that another health hazard may have been brought to me courtesy of the ineptitude, ignorance, and incompetence of AquaGuard.  The tests verified that the tiles and the mastic had prohibited levels of asbestos.  (See ASBESTOS Bulk Samples Tests.)

Fortunately the air samples came back clean.  For that reasons I decided not to claim any damages related to the mishandling of the asbestos containing materials.  The Arbitrator made note of that fact in the Award wherein he states:  “The removal of the existing floor tiles along the basement perimeter was done in an unacceptable manner, leaving unsightly jagged edges along the tile edges, although the Contract provides that Contractor is not responsible for damage to tile or for repairing or replacing tile.”  In a related footnote the Arbitrator states: “These floor tiles were tested by Air Quality Environmental, Inc., which determined that the tiles and the mastic which glued the tiles to the floor both contained 2% chrysolite asbestos.  The Subcontractor had broken up and removed these asbestos tiles from the basement, stockpiled the tiles outside in the yard, and left a number of tile shards scattered about the yard.”

None of this aggravation, never mind the violations of rules and regulations, was necessary.  This is another example where the total disconnect between the salesman/inspector, the subcontractor, and the hands-off, eyes shut management of AquaGuard led to problems.   In short this is what you get when a company fails to have, or follow, common sense procedures in terms of quality control or inspections.